Three months ago, I begin attending Sanskrit classes at the Lubbock Yoga Shala.

After my first class, the familiar and delightful feeling of being a student and learning came back to me. And I realized that I forgot what it felt like. It is a sense of learning what you did not previously know and an excitement for the knowledge that is to come.

The next few classes progressed at a very slow pace. I never knew how complex a language could be!

"The language of Saṃskṛtam is put together, constructed, well or completely formed; refined, adorned, and highly elaborated."

So, as with any language, there is a lot of material to absorb.
I found one of the most interesting aspects of Sanskrit to be the different identified areas of the mouth that letters forming words can come from. The English language is a very Dental spoken language - which is why lip-reading in English is easily distinguishable. However, the Sanskrit language consists of letters from varying mouth positions: Gutteral, Palatal, Cerebral, Dental, Labial, Semi-Vowel, Silibant, and Aspirate. So the difficulty, in fact, comes from the lack of known association. There are literally few comparisons in the English language and the Sanskrit language. Fascinating!! 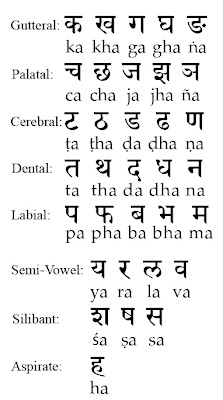 The past few months our Sanskrit class has progressed at the speed of a (very slow) Kindergarten class. At one point last month, we begged our instructor for a SONG. A simple song that we could sing to remember the letters... you know, like the Alphabet Song..
Sadly, no such song exists for the Sanskrit language.


But somehow last week - everything finally started making sense to me. We have covered the 46 characters of the Devanagari (written Sanskrit) alphabet. And we are now learning how to abbreviate the characters together to form actual words. 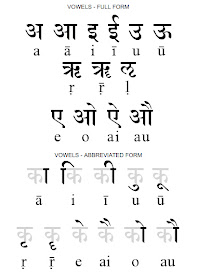 Our big accomplishment at the end of last month was learning to spell "ghetto"!
This week we learned many many more (pictured in my sketchbook below): "Time, Neat, Water, Sangha" (Community), aaaaand "Val" "Brown"! 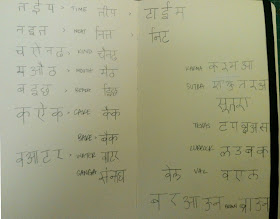 I absolutely love the challenge that learning a new language has brought to my life. I am thankful for the opportunity to be a student again.